We have just returned from performing at a number of WW1 Commemorative sites in Belgium. We were delighted to receive a personal invite to perform at The Menin Gate (Ypres), St George’s Memorial Church (Flanders Field), Cloth Hall (Ypres) and Talbot House (Ypres).

The group consisted of young people and volunteers from Ferryhill and the surrounding areas who travelled to Belgium to perform in an array of high profile commemorative events. In addition to the scheduled performances, our young people were also granted special permission to perform at Tyne Cot Cemetery, the largest British and Commonwealth WW1 Memorial in the world. A special honour was our young people singing ‘Silent Night’ on the very site where the Christmas Truce took place nearly 104 years earlier. This was an unforgettable and very unique experience and one which moved everyone who saw and heard it. 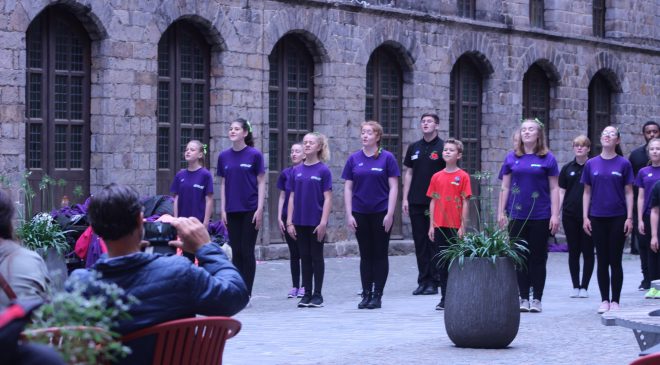 The Over the Wire young people were approached by many people from different nationalities who were moved to tears by their performance, empathy and understanding and since our visit we have been inundated with message from many people from a range of nationalities and Belgian dignitaries who were quite simply astounded by the power of the message that the young people conveyed.

The young people engaged on the Over The Wire project have spent a considerable amount of time learning about WW1 and then really understanding the impact of it on yesteryear and today’s society. Prior to visiting Belgium, they had participated in a number of workshops conducted by the Green Howards Museum, Heugh Battery Museum and an array of ex-service personnel.
As a result, they have an long-lasting respect for those who have served in the past and continue to serve their country. This was clearly demonstrated in all of their performances and the overwhelming response from local dignitaries and attendees at the Menin Gate performances.

“How can we ever put into words the emotion we have witnessed today in this heartfelt performance. Thank you.” Mrs Patricia Hawkins, Lay Vice Chair of St George’s Memorial Church.

“Thank you so much for an inspirational and moving performance. You were all amazing. What can I say, totally moved to tears.”
Church Warden, Mr Peter Hawkins 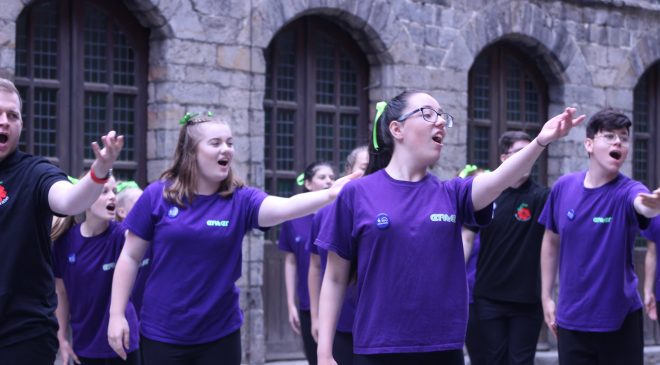 Our commemorative performance at The Menin Gate was made all the more special because we were given special permission to sing two of our own compositions at the Last Post Ceremony. This is a rare and special honour. Due to requests from people at the Menin Gate who wanted to purchase ‘Carved in Stone’, by Paul Flynn, this track has been recorded by Enter CIC young people and is now available on all online music stores, including iTunes, Spotify and Amazon Music.

We also took three Tommy soldiers, donated by FerryDec and made by Endeavour Woodcrafts. Our staff, volunteers and young people were proud to display the figures, and did so at most of the memorial sites.

This project began because our young people were concerned that many of their peers did not connect with The Act of Remembrance. They wanted to engage in a project that would develop their personal understanding, but also provide them with the knowledge that would enable them to create their own commemorative performance. This would be used to teach and engage other young people who have yet to learn the full significance of the sacrifices made 100 years ago and the sacrifices being made in our own time.