When we arrived in Belgium we were immediately taken to Lijssenthoek Military Cemetery in Poperinge, Belgium. This was the first Commonwealth cemetery that we visited and the impact of this initial visit was clear for everyone to see.

The whole group listened intently to Dr Bruce Cherry who explained to us that we shouldn’t look at the gravestones as a piece of carved stone, but as the front cover of a book. Each book representing an individual with a life story. Whilst thinking about this, he asked them to look across the cemetery and to consider how many stories there were associated with each headstone.

We were given the task of looking at the ages of the soldiers who had fallen and we learnt first hand that many of the soldiers who had lost their lives in WW1 were not much older than us! This prompted many of our us to capture our thoughts on video and immediately connected us to the project. Reinforcing the fact that WW1 was not an old person’s war, but very much about the bravery and sacrifice of young people who passionately
believed in the cause and fought for our freedom, so that we could live the lives we do today.

“There was a young boy of thirteen who enlisted, underage, and he is buried here. That’s about the
same age as me now. To think that, at thirteen, that would be my life over, is a very scary thought.”

“It really hit home for me when I understood how many men died without being identified. They
only have ‘Known Unto God’ on their grave stone. Thinking about all those families at home that
didn’t know the fate of their sons, brothers, fathers, is quite emotional.”

“Nellie Spindler is buried here – she was a staff nurse and died in a shell attack at Passchendaele
– she is the only woman killed on The Western Front. She was buried with full military honours.” 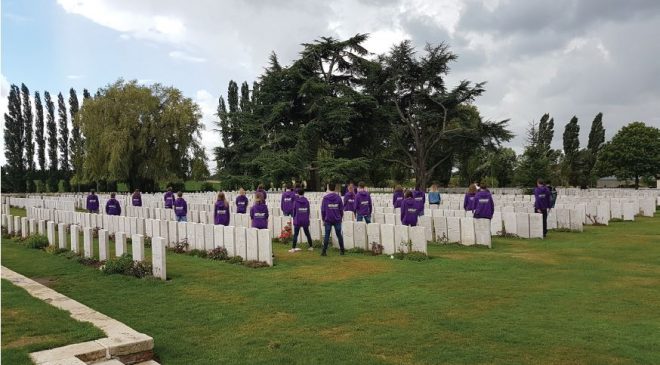